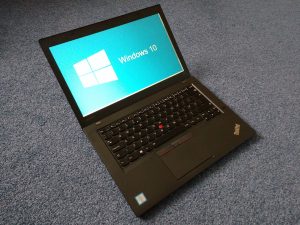 A few weeks ago I was blessed with a new Lenovo ThinkPad T460 to replace my old and very beaten up HP Pavilion DV6-3180EA. This also meant an upgrade from Windows 7 to Windows 10 that I have been putting off for some time. Here are my first impressions of both the T460 and Windows 10.

Prior to arrival of the T460

First impressions of the T460

One of the main reasons for not upgrading my old HP laptop to Windows 10 was that the upgrade just would not work. Thankfully I have now totally avoided the hassle of upgrading a machine myself and have also started with a lovely fresh install.

Generally Windows 10 seems to be a well rounded product. Much better than Windows 8 that was a blunder in my opinion. I’m glad someone realised the whole world doesn’t use tablets. As my T460 is a touch screen I appreciate the touch aspects of the OS but of course spend most of my time using a Keyboard and Mouse.

Playing with the upcoming Linux subsystem for Windows should be interesting https://blogs.windows.com/windowsexperience/2016/04/06/announcing-windows-10-insider-preview-build-14316/

The T460 is a great machine and I would highly recommended it, at least in the specs listed above. A few reviews have said that if you are going for a lower spec machine it may be worth looking at other models.

I would also recommend the upgrade to Windows 10 if you are on any older version of Windows (of course machine spec dependant). This is more like the release of XP than the release of Vista or 8.