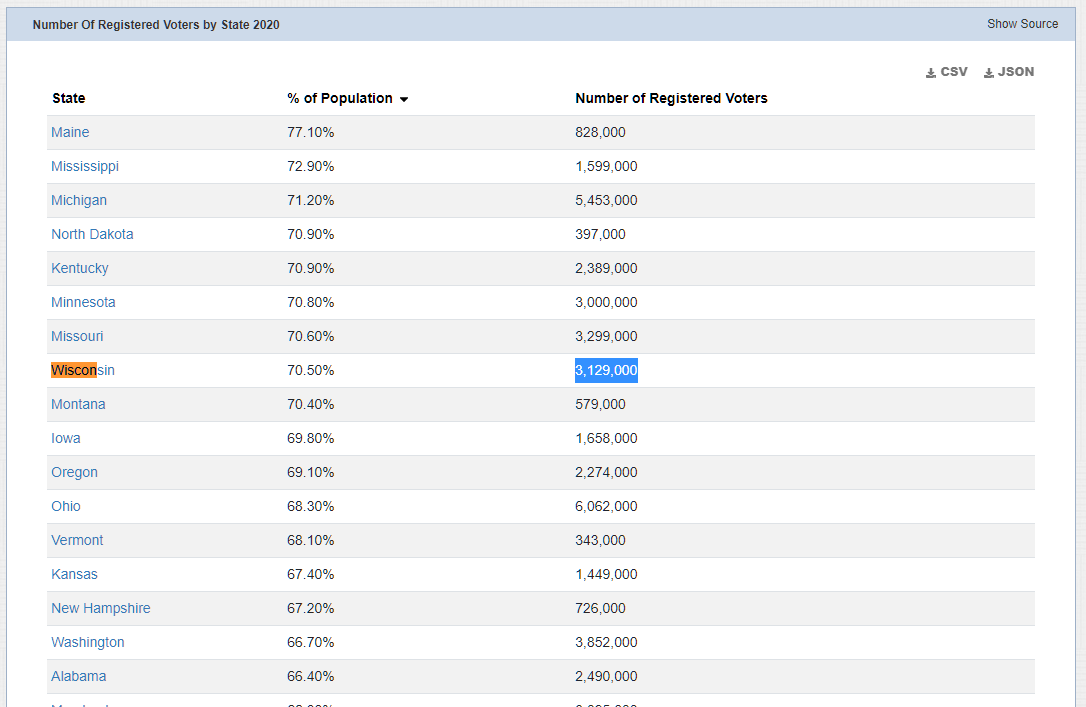 I started sending the link of the snopes fact check to accounts that were tweeting about the fact that the number of voters was higher than the registered voters. On the whole I probably did this 100-150 times. The most seen tweet (seen below) received 2856 impressions and 192 engagements, 157 of which were link clicks.

Occasionally people would respond saying that they didn’t trust snopes of fact checkers in general. But conveniently I was prepared hinting that anyone can do this fact check! Turns out the face checkers are not lying…

Once I had found the correct source of information I started leading my tweets with those links instead. It turned out that the Wisconsin elections twitter account had actually tweeted on this topic a couple of hours before.

Interestingly the initial tweets with the single link to the fact check seemed to get quite a lot of interactions. The follow ups suggesting people did their own fact checking mostly fell dead in the water.

As I spent more and more time tweeting out the links I started to feel a bit robotic, and also realized that I might just be sending this link out to a bunch of bots. The bots were having the same thoughts…

The source of the problem here was the initial person that likely performed a Google search to find how many registered voters there were in the state, finding the value from worldpopulationreview.com and non necessarily verifying this data anywhere. The result appeared right at the top after all, so who wouldn’t trust it?

I first looked for a way to flag the result as bad, but at that moment realized that Google doesn’t really offer this as a feature. There are lots of tools for reporting spam and phishing pages for example, but I couldn’t find one for just bad data and results.

I started grasping at straws and sent a tweet out asking for help.

And I was swiftly directed to @dannysullivan the public search liaison for Google, who quickly let me know that my concern had been passed on.

The search results page continued to iterate through a few different versions with the news moving around, changing display style and updating, but always being included just beneath the first still incorrect result.

That was until I checked back a few days later, and on November 11th the order of results had shifted, dropping the worldpopulationreview.com site from 1st to 4th position. The top 3 results then included pewresearch.org, kff.org and census.gov.

Another thing potentially worth noting is that throughout this time the number of results returned for this query at all dramatically dropped. I wonder if this is a result of some general algorithm of something specific to this issue?

I didn’t really look at other search engines on the day looking at Bing, DuckDuckGo, Yahoo and Ecosia on the 13th November worldpopulationreview.com was listed as the first result (ignoring adverts). This doesn’t mean that when the page was wrong it was listed first, but that is highly probable.

I used this page on the 4th of November to raise the issue with the site owners, and seemingly by the 5th of November the issue was fixed with correct data and updated sourcing. I didn’t get a response from the owners, but I’m assuming either my email or an email from someone else triggered the fix.

My Twitter interactions with people were generally rather nice. Not much hate being thrown around etc. Though trying to respond to the thousands of people tweeting about the issue wasn’t really a solution. It would be interesting to see Twitters election / public process / fake news notices be used on a case such as this.

A systematic way for reporting links such as this to search engines probably makes sense, I didn’t find this on the day. My only route to poke things currently would be via Twitter.

It’s been interesting seeing the Google results change over the last week or so, and it will be interesting to see how worldpopulationreview.com rises back through the ranks now that it has correct data. I can’t help but feel that there must be some general search algorithm changes that could happen in “sensitive” areas such as this.