There are more Orain backups! More recent than 15th June 2015 as stated in my previous post! Dumps from August 2015 are all on-line right now!

Many thanks to WikiTeam at archive.org.

Edit: Simply search for “WIKINAME subject:wikiteam” and you should be able to find your dump (where WIKINAME is the start of your orain domain)!

So, from where I am sat right now, it looks like Orain is dead. It could just be me but Orain has been struggling with issues for a while now and the events that took place last week were basically the final nail in the coffin.

As final nails in coffins go, I don’t see this nail being removed any time soon.

Some brief history and facts

Orain was founded by Dusti and Kudu in July 2013, which means it is currently just over 2 years old. Orain has no paid ‘staff’ but instead is kept on-line by a small team of volunteers. The number of volunteers trying to keep the sites up at any given time has varied although in the past month of so that number dropped to 2. During the 2 years the Orain services have been on a variety of different hosts, including AWS, Ramnode and most recently DigitalOcean.

Firstly I will say that I still do not know exactly what happened, or how, but it must have been one of the following things:

There are other options but frankly the likely hood of those compared with the list above is slim.

Possible conclusions to all of this

I am happy to answer any questions I can, although basically everything I can say is written above.

As I previously said I would have expected the founders of Orain to inform the users of Orain of the events, but apparently they haven’t found the time to, or don’t want to, or a mixture. I hope that they will soon.

Personally I want to make try to help everyone that did have a wiki with Orain, I have the backups and am of course willing to give them to the wiki owners so that they can move to new hosting.

I have a few other posts about Orain, you can find them below.

During May of 2015 Orain was the target of a DDoS attack. The attack ended up lasting roughly 9 days and bringing the service to its knees repeatedly. The ‘official’ timeline of events and write up can be found here. Below I will discuss why the details of the DDoS as well as how it took Orain down so easily and the measures that have now been put in place.

Details of the DDoS 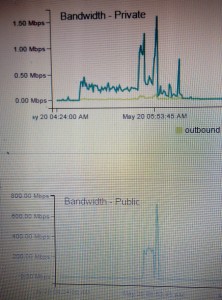 The DDoS was first detected on May 20th and immediately took down all of the Orain services, although at this stage no one knew that it was a DDoS, we simply thought Orain was having IPv4 routing issues as the site was still accessible on IPv6.

After messaging DigitalOcean support they revealed to us that they had nullrouted our load balancing instance (the main instance needed to access the website) due to an inbound DDoS, they also apologised for a lack of automated email about this.

The image to the right (sorry for the poor quality, apparently I didn’t take a screenshot but took a snap on my phone) shows the spike of around 800Mbps inbound on the public network interface and a small increase in the internal traffic. After this spike both interfaces can be seen to fall to 0Mbps. This was due to the public IPv4 address being nullrouted by DigitalOcean.

After a period of time DigitalOcean would return the original route of the IP to our box and service would be restored for a short period before the next round of the DDoS hit us, and repeat…….

The DDoS did not concentrate on a single instance but as all public IPs were available to the world on GitHub the attackers could easily target them all and bring down every last service Orain was running, mail, dns, web, stats etc.

What changes have been made

So as discussed above the reason the attack hit Orain so hard was because all of the public IPs for servers were available to be abused. This in combination with our services being run on VPSs which nullroute traffic when DDoSs are detected meant attacking Orain was really quite easy..

Firstly I made the switch to CloudFlare. This would mask the IP addresses of the servers when, for example, requesting meta.orain.org. Previously this would have pointed you directly to the public IP address of our load balancer, now it will direct you to an IP address for CloudFlare’s CDN. Of course with a change of name servers we had to wait for this change to propagate around the world.

This in itself was not enough as of course the attackers already had our IP addresses and continued to DDoS Orain once protected behind CloudFlare, thus we needed to rotate the IP addresses of all of our servers and make sure that the new IPs were no longer visible anywhere.

The easiest place to find all of our IP addresses was in our public DNS configuration repo located at https://github.com/Orain/dns. With the move to CloudFlare this repo would no longer be used, so check, no new public IPs here!

The second place that public IPs could be found was within our Ansible playbook located at https://github.com/Orain/ansible-playbook. All public IPs were replaced with private internal IPs in this change as well as the addition of a hosts file to ensure all instances always resolved Orain domains locally rather than being pointed to CloudFlare.

So, Lastly, IP rotation. DigitalOcean do not provide a user with an easy way to grab a new public IPv4 address for a machine as of course this is something that could be easily abused and thus the process takes a bit more time. Each box must be shut down, a snapshot created, then a new box created from the snapshot. For all of Orain’s servers this took me roughly 1 hour.

Side effects of the changes

Orain is a community-driven, not-for-profit wiki network that I help to maintain.

It runs Mediawiki and has been around for the past couple of years. Over the years it has been hosted on VPSs from multiple different providers and its technical layout has changed massively from each provider. Below I will try to summaries it’s current layout! This will include: